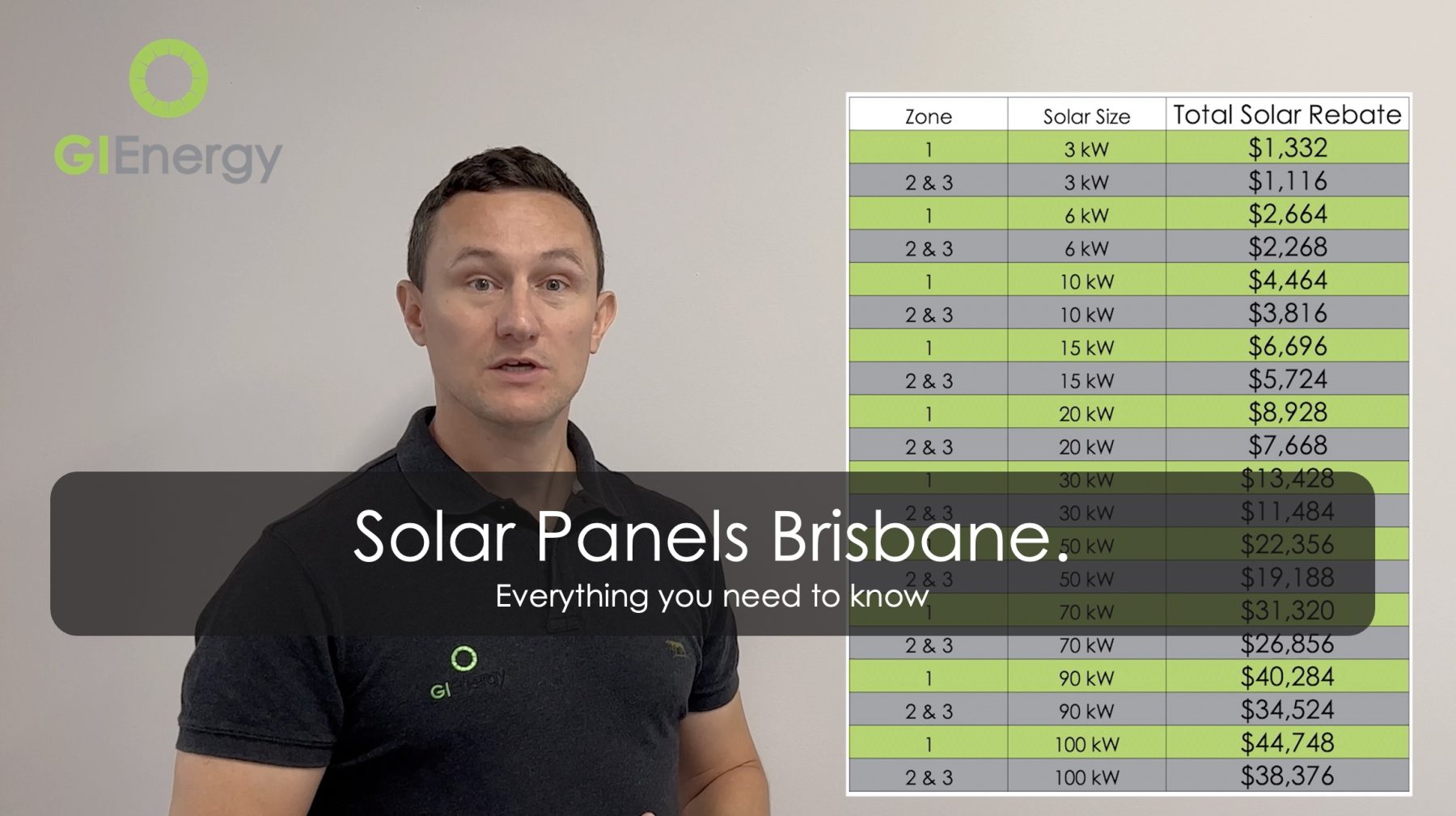 By the end of this article, hopefully you’ll be able to decide whether you think it’s worthwhile getting solar panels for your home or business if you are located in Brisbane.

So, Brisbane is obviously the capital city of Queensland. Otherwise known as the Sunshine State. So that should give you some indication as to how well solar panels are going to perform. Obviously, we get lots of sunshine here, so it’s no surprise that in a recent Clean Energy Council report, it showed that almost one in three homes have solar panels. Thats over half a million homes now in Queensland that have solar panels already installed.

This makes us the leading state in the whole country in terms of solar penetration per rooftop. Now, specifically talking about Brisbane, we’re blessed here with 283 days of sunshine per year. If you compare that to most other cities around the world, we’re very, very fortunate to have a huge amount of sunshine. This obviously means we can have a great outdoor lifestyle and also means that your solar panels in Brisbane are going to produce more energy than in most other cities. 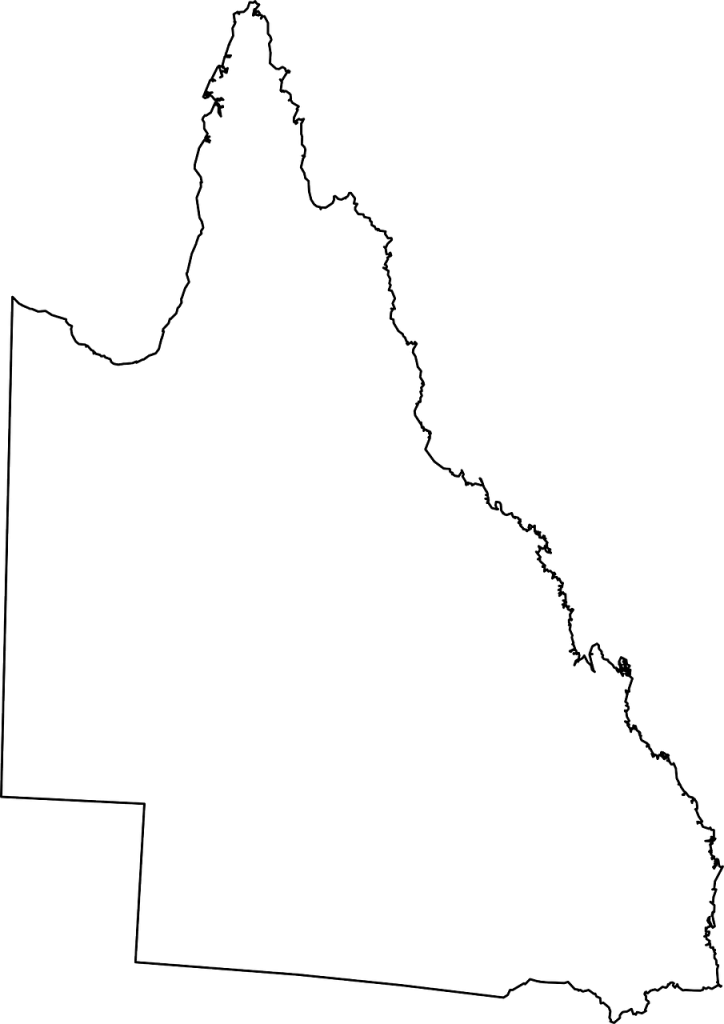 What are we going to cover here?

How much energy can I produce with solar panels in Brisbane?

So first of all, let’s have a look at how much energy you can produce with solar panels in Brisbane. The chart below will show you if you have one kilowatt of solar installed on your roof, you’ll likely to produce 4.2 kilowatt hours of solar energy every day of the year if you average it out. Now, bearing in mind, this figure has been taken from what the Clean Energy Council told us we should use as our production estimates is an average figure, and it does take into consideration cloudy days, winter months, summer months, and it’s also based on a north facing roof with no shade. 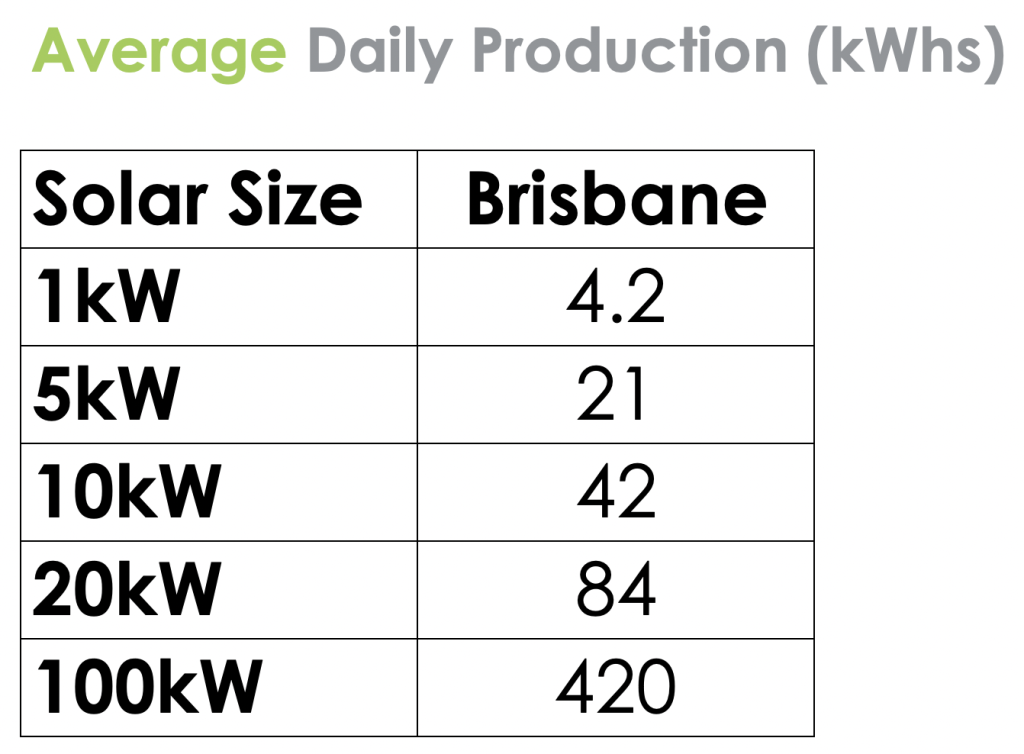 So obviously with your own roof, you’d have to look at the orientation, the angle, the potential shading in and then, of course, what type of products you’re using as well. So all of those things are going to mean that that number is going to vary from one home or business to another. But broadly speaking, a good place to start is to base it on 4.2 kilowatt hours of solar production per kilowatt of solar panels installed on your roof.

A typical home system these days is between 5 and 13 kilowatts. A five kilowatt system, as you can see, will be producing around twenty one kilowatt hours of solar energy every single day when averaged out across the year. If you go up to a reasonable sized commercial system, which would be 100 kilowatts, then you’d be producing roughly 420 kilowatt hours of usable solar energy per day when averaged out.

Before we move on from solar PV production, it’s probably worth noting that some solar panels in Brisbane that we’ve installed over the years on really good roofs where customers have requested very high quality solar panels, we’ve seen results 37% higher than that annual average of 4.2 per kilowatt installed per day. So, if you install a very good quality system and you use a very good installer, there’s no reason why you can’t produce a lot more energy than that Standard 4.2 calculation suggests.

So what does that actually mean to you?

The basic way for you to understand how that’s actually going to impact your power bill is if you have a look at the back of your power bill, you’ll see that the units that you’re charged in are called kilowatt hours. So every kilowatt hour that you used, you’ll be getting charged. That’s an amount for typically between 18 and 24 cents, depending on the tariff that you’re on. 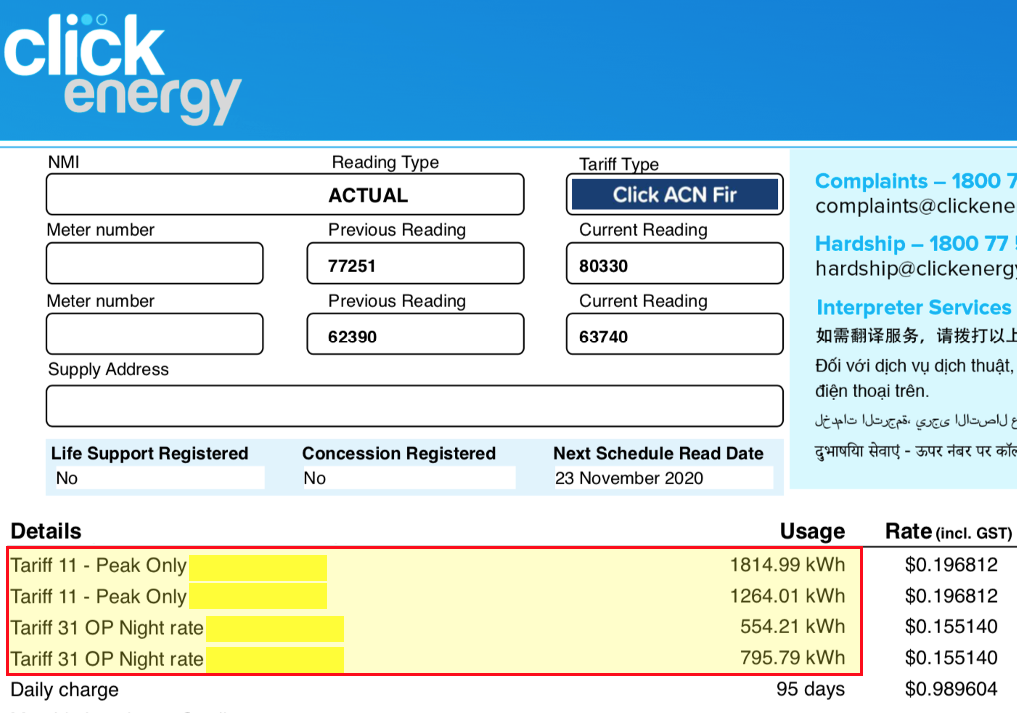 So every time you use a kilowatt hour, you’ll be charged that amount. Every time your solar panels produces a kilowatt hour, it can therefore save you that amount. So if you’re using the energy, it will save you from buying one kilowatt hour from the grid. If you export that power, then you’ll be paid a feed in tariff, which can range anything from around eight cents in Brisbane, up to about 14 cents at the time of writing. That’s a simple way of explaining it. For more information on how to understand your power bill, click here. 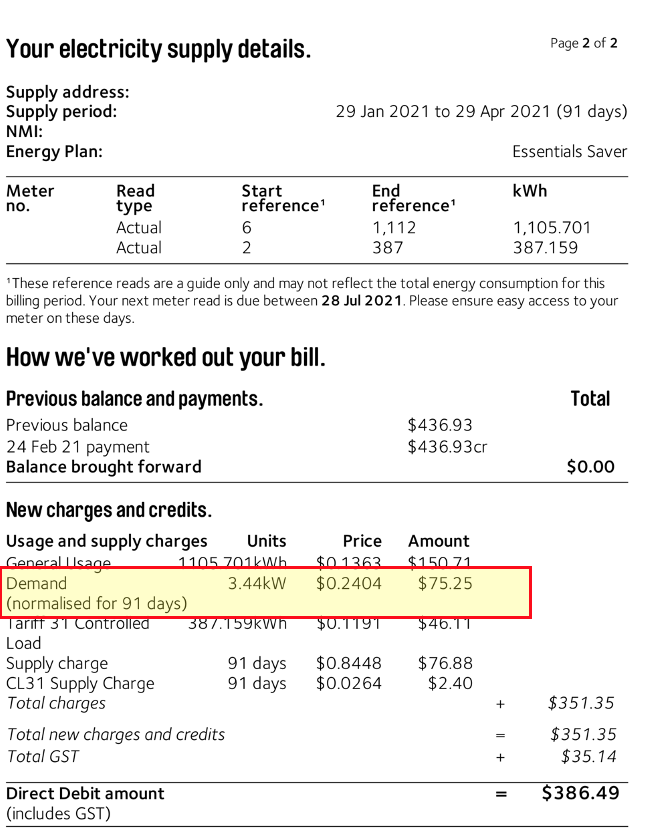 You may also have a little chart that shows you how you’ve used energy over the last 12 months. Usually it’s higher in summer when people are using air conditioning a lot more. And then in the winter months, obviously we’re not too cold here in Brisbane. So heating is not usually an appliance that you use too much. So your bills typically will dip a little bit in the winter. So it’s important before you start size in a solar system that you have a look at your load across the 12 months and also consider how you use and power over a 24 hour period.

Some people will use more power during the day and less at night. Most homes will use more after people come home from school and work, and then through till the evening when people go to bed and perhaps early in the morning when everybody’s using things to cook breakfast and use showers, etc. 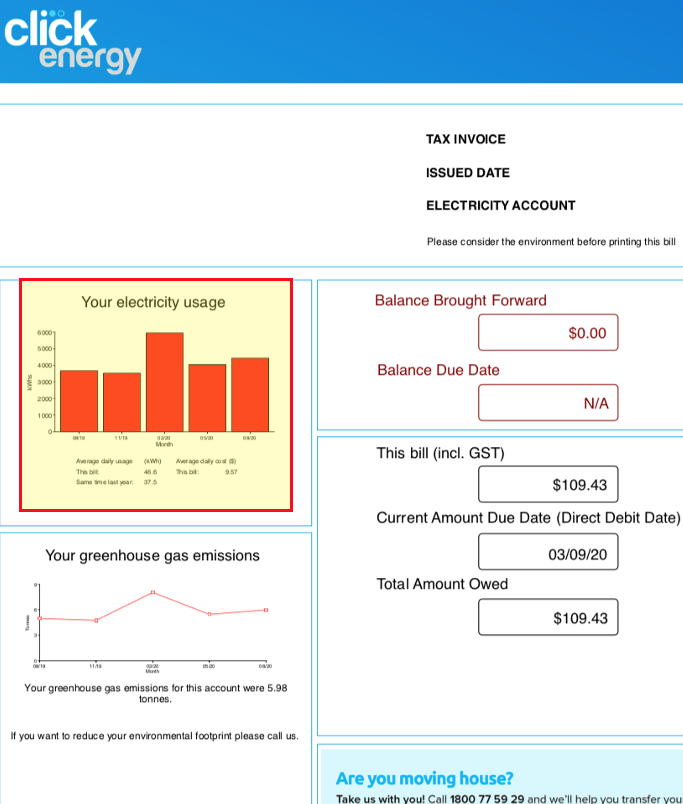 So you really need to have a look at your low profile before you work out how many solar panels you need in Brisbane. Obviously, the guys here at GI Energy can help you do that, but typically you’ll be able to see what your average daily use is on that little chart on your power bill. And then that’s a good starting point to try and work out what size system you’ll need. Based on the previous chart that shows the production of the Solar System and the size that you need to get to that production.

What about solar batteries?

Lots of people now are starting to purchase batteries with their solar panels in Brisbane. There’s more and more reason to purchase batteries as the days, weeks and months go on. We have another article that shows you exactly how batteries work, but essentially as time goes on, feed in tariffs decrease which means that you get less money for excess energy that you produced during the day, which makes the battery more valuable. There are some other components there also, which will give you more savings with the battery. For help choosing the right battery, click here.

We have reached a point now where solar panels have stopped decreasing in cost, and more recently we’ve had some increases in cost. The steep decline in the cost of solar equipment is now certainly over. And unfortunately, it’s either plateaued or is going to increase in the coming years. That being said, the government subsidies at the time of writing for solar panels in Brisbane are extremely generous. 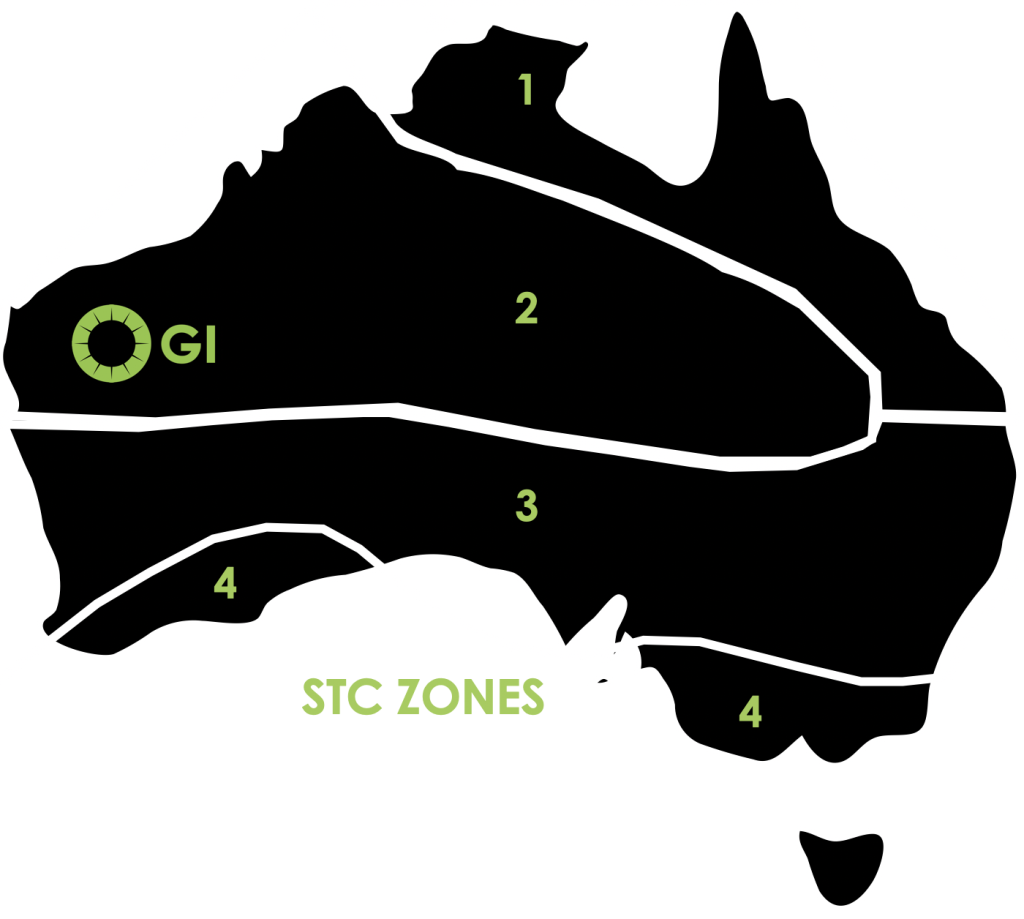 You can see from the above image that Australia is split into four different zones. Brisbane is in zone three. What that means is that Brisbane will get more government subsidy than somebody that is located in zone four because we have more sunlight. Zone one is higher again. So if you live in Mount Isa or areas in the Northern Territory for example, you would get more sunlight hours than we do here in Brisbane and therefore you get a higher government subsidy in terms of dollar value. 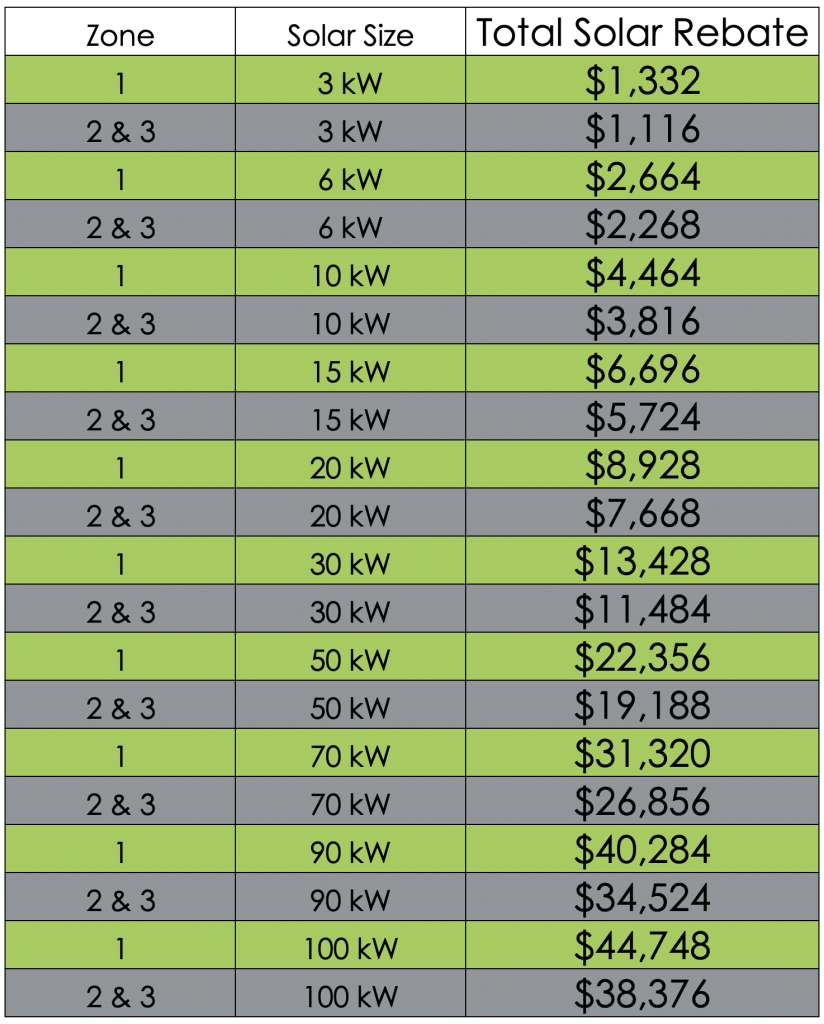 They have been running for a long time. We don’t know when that government subsidy will stop. So if you’re serious about solar energy and serious about installing solar panels in Brisbane, our advice is always get some quotes. And if it all adds up for you, get it done before anything changes here.

How much is actually going to cost you to install solar panels in Brisbane?

So if you look at the chart below, you can see here that a 6.6 kilowatt system, which is a typical smaller sized system these days in Brisbane, will cost between five thousand nine hundred eighty seven dollars, up to about thirteen thousand five hundred ninety dollars. Please bear in mind that we’ve taken a lot of averages into consideration here. The low cost is for a very good quality system still. You can buy solar energy for less than that in Brisbane, but we’ve started with a good quality system and a relatively straightforward install right the way up to the best money can buy, combined with a more complicated install. The chart also goes three, eight, ten, thirteen, fifteen and twenty kilowatt systems, which have the usual range of systems that people purchase in Brisbane at the moment.

For commercial systems, the price is quite varied depending on the install, so you’d have to get in touch with us if you were looking at something that was larger than 20 kilowatts.

We’ve also got two categories there. One without a battery and then one with a battery. As you can see, the battery does add a fairly significant cost to the overall package. That being said, as we mentioned before, the value of having the battery installed now is going up and up as each year passes. And that if you are considering a battery, you’ll know by the end of reading the article or watching the video from the link whether or not you can justify that higher cost and whether or not you think it’s something that is worthwhile for your home or for your business.

How long will it take to get my money back through savings?

So as mentioned at the start of this article, Brisbane gets more sunlight hours than most cities across the world. We’re very fortunate here that we also have large government subsidies that will help us pay for solar panels here in Brisbane. When you combine all of that together, it really means that you can get your money back that you outlay on a solar system from anywhere between three and six years, typically depending on how you use energy, how much you pay for your system and then, of course, the angle, orientation and shade that may be on your roof.

So there are some variables there to consider. At GI energy we have sophisticated proposal software where we can use your home address to basically put solar panels on the roof and give you those production estimates and those saving estimates. It’s very easy. It’s free to do, and there’s no obligation. So if you’d like to see exactly how much solar panels can save you in Brisbane, please get in touch and we’ll do a free proposal for you that outlines all of this specifically for your home. 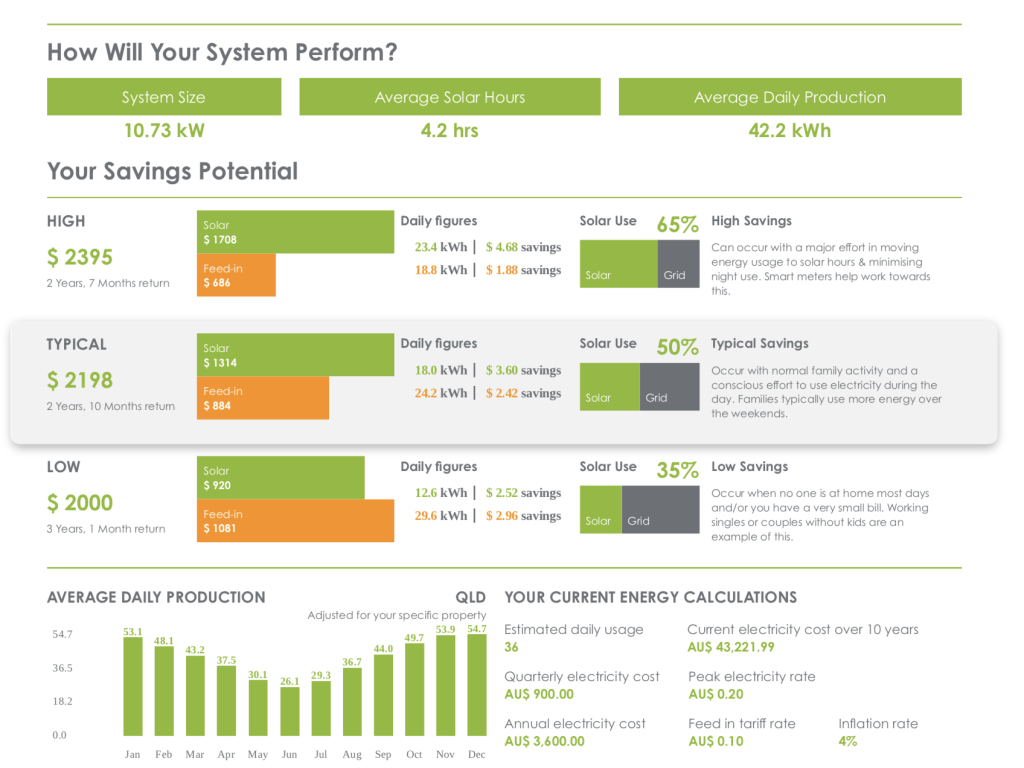 Thanks very much for reading. I hope you’ve got some value out of this video, and here are some other links you may find useful: