Who invented solar panels? -The early history of solar energy 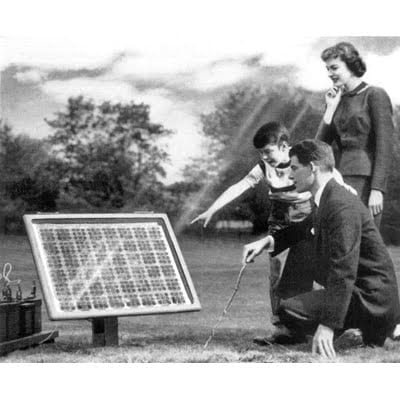 Who invented solar panels? Solar energy is the future. We believe it will play a crucial role in providing clean energy to existing and future generations. But to better know where the solar industry is going, it’s important to understand the history of this technology and some of the challenges that we have already overcome.

Edmond Becquerel discovered the principle behind solar energy in 1839. While working in his father’s laboratory and doing experiments about photography, he discovered that some materials can generate voltage and electric current when exposed to light. This physical and chemical phenomenon is called the photovoltaic effect, also nicknamed the Becquerel effect.

In his experiments, Edmond Becquerel demonstrated the photovoltaic effect by having two plates of platinum and gold immersed in an acid, neutral, or alkaline solution and exposing them to solar radiation. This was the very first electrochemical cell. It wasn’t very efficient at all, and was limited to laboratory applications.

In 1873, Willoughby Smith observed that Selenium was a very efficient material for the photovoltaic effect.

Later in 1881, Charles Fritts created the first solar cell that didn’t need to be bathed in a solution. The first solid state photovoltaic cell was selenium coated in a thin layer of gold. The device was only around 1% efficient but at the time, this was a huge discovery. The very first solar array was installed on a New York City rooftop using Fritt’s selenium cells.

1839 -The birth of the modern solar cell

Who invented the solar panels we see today? Russell S. Ohl was an American engineer who was a notable semiconductor researcher. In 1839, he discovered the P-N junction (having a positive side and a negative side inside a single crystal semiconductor). He studied the conductivity and properties of various types of crystals. His work with semiconductors and P-N junction led to things such as the transistor, LEDs and laser diodes, and in 1841, his creation of the first silicon solar cell, a design still used in today’s modern solar photovoltaic (PV) panels!