Home / Which is the best orientation for solar panels?

Which is the best orientation for solar panels?

Is East or West better for solar panels? 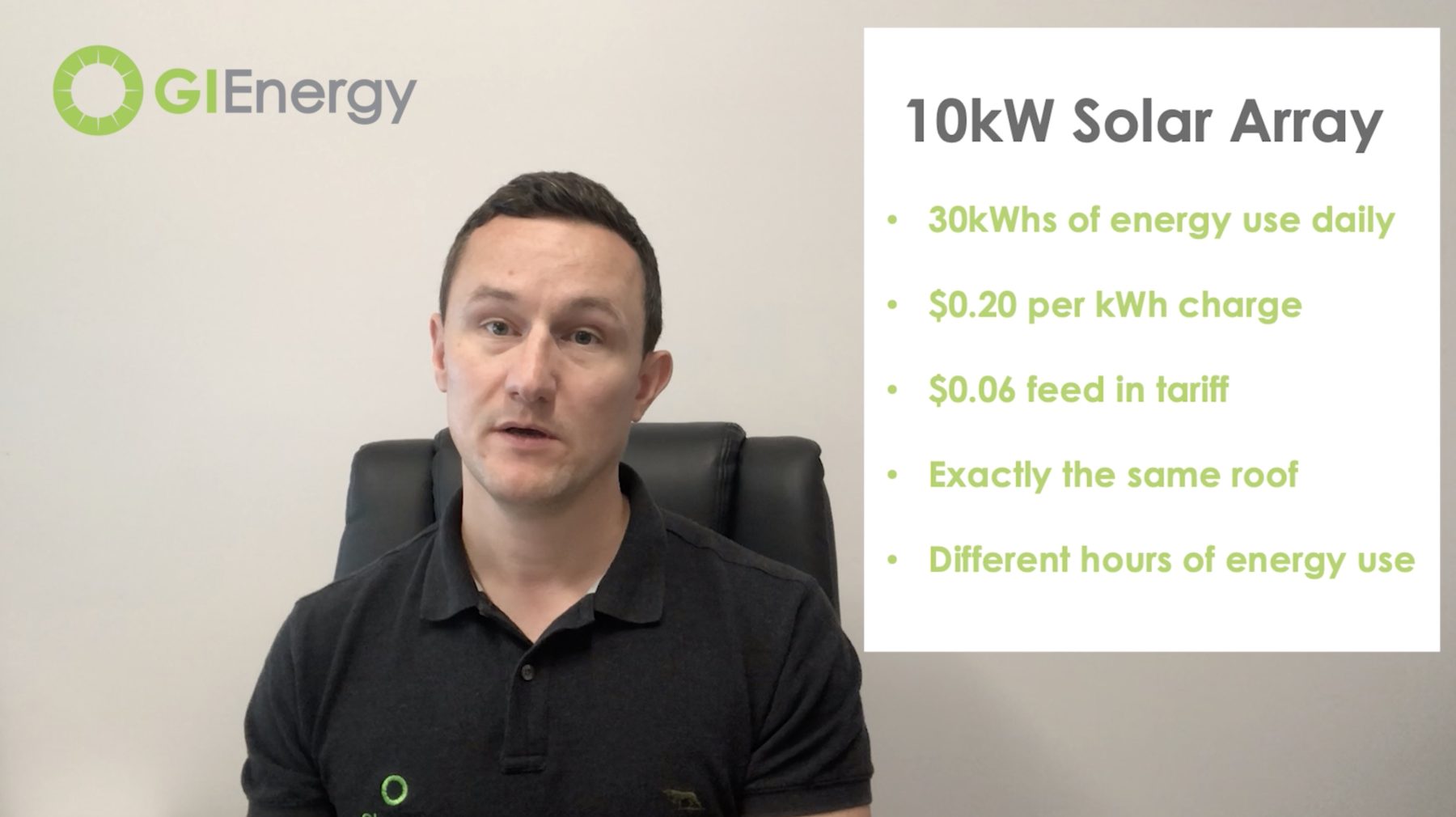 Is it best to have your solar panels on the West roof, the East roof or the North roof? This video and article explores 2 different scenarios in terms of energy use and how the different orientations effect savings.

We’ve been talking a lot in the office the last couple of weeks about the best orientation for your solar panels to maximize the benefit and maximize the amount of money you can save. So today, we’re going to look at:

Scenario A: We’re going to look at what we would consider to be a typical home, which would be a family of four, with two children at school age. 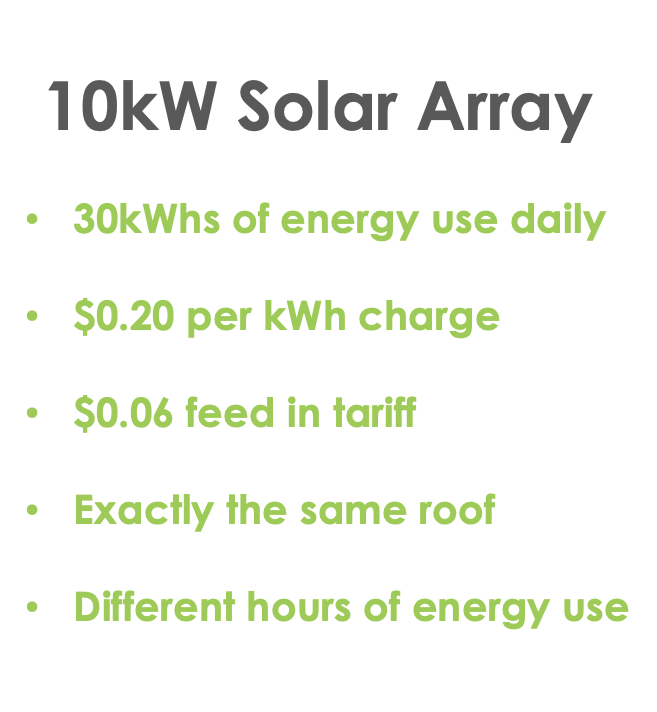 For this simulation, we’re going to use a feed in rate of $0.06 for energy that you sell back to the grid, and $0.20 per kWh for energy you buy from the grid.

So, let’s check out that first load profile. 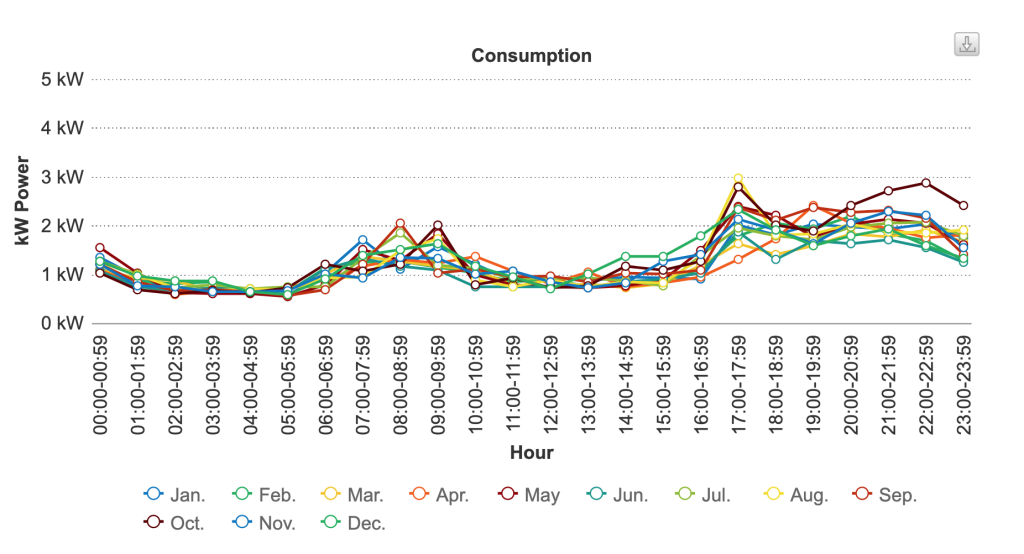 This is what we classify as a typical family load profile. You can see there’s very limited use during the day after about nine o’clock in the morning when people have left the home. Then, then when people are getting home from four o’clock onwards, that load profile increases. Finally, it dips again overnight, until early morning between 5am and 6am, when everybody starts using appliances in the morning. We’ll take a look at the Western roof first.

In terms of production for the Western roof, you would produce 13,737 kilowatt hours with the panel’s all on that Western roof.

On the Eastern roof, you have produced 13,633 kilowatt hours.


If you did have enough space to put all of your panels on a Northern roof, you would produce 15,342 kilowatt hours of energy.


So, if you had enough space to fit that whole 10kW system the Northern roof is the clear winner. 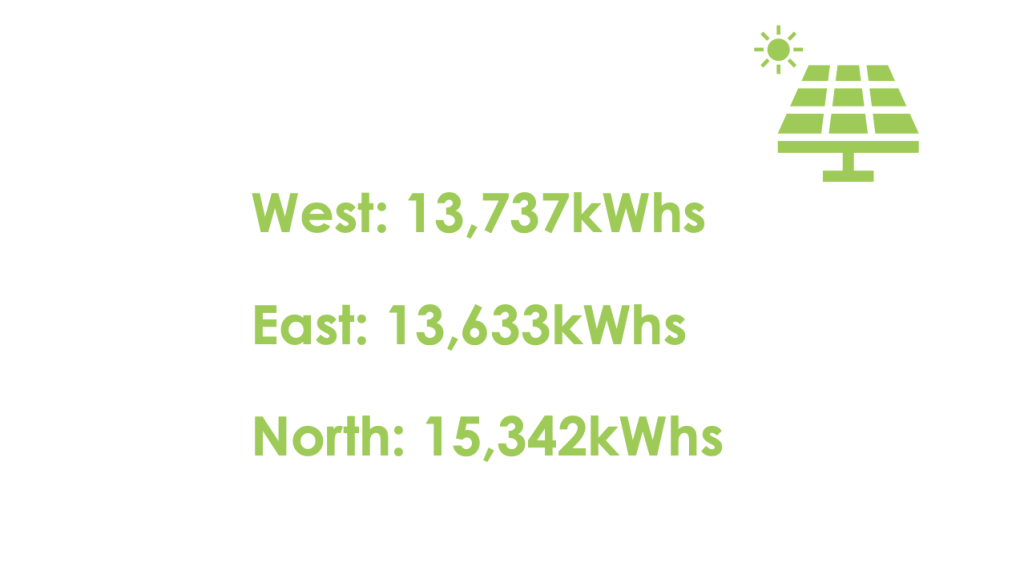 Next, let’s take a look at the amount of solar actually used vs. exported.

In terms of exported energy, on the Western roof, you would export 72%. 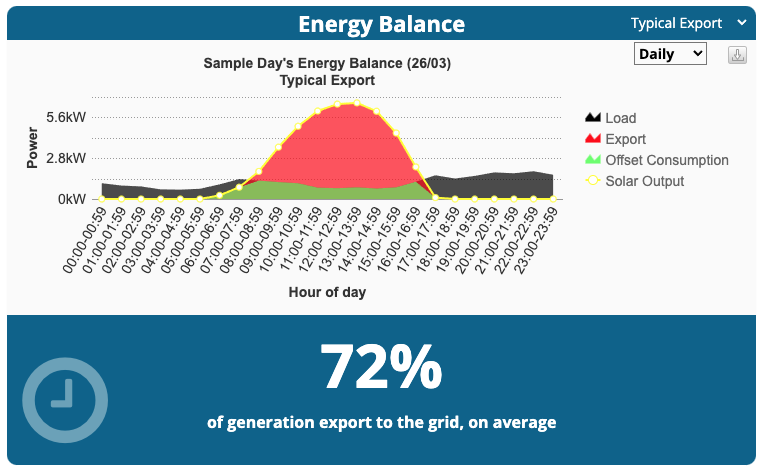 On the Eastern roof, very similar again, you would export 71%. 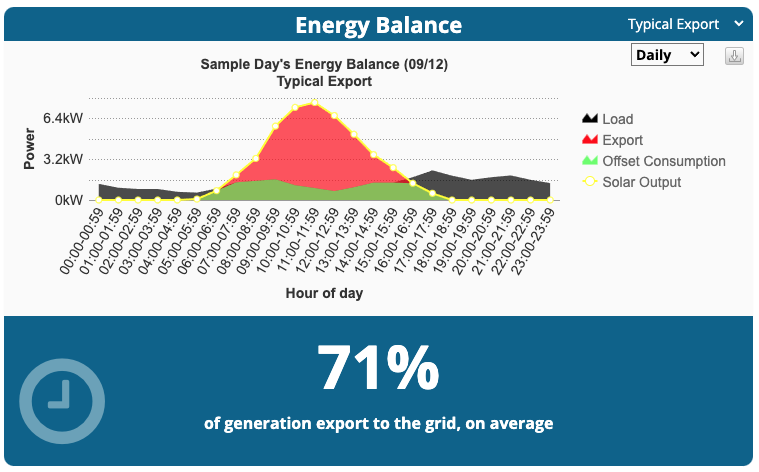 And on the Northern roof, with that higher production, you would put export 74% of energy. 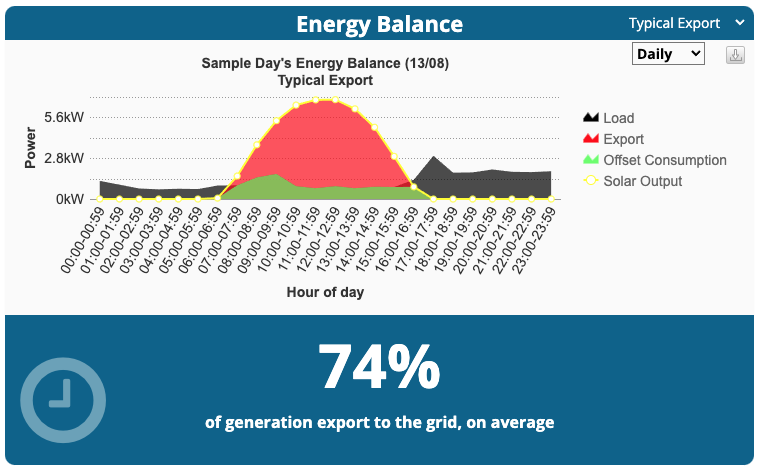 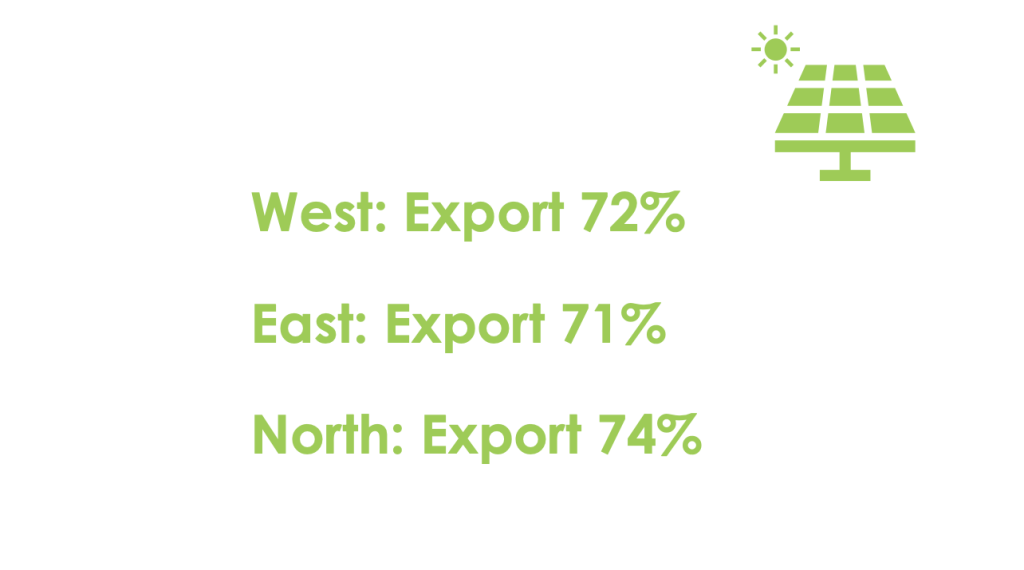 So, what does that really mean to you and dollar savings?

Note: We have purposely been very conservative with the load profiles and savings estimates for both of these scenarios in order to show how results can change with different orientations. The actual amount of money you will save with a 10kW system will probably not be accurate for your home due to the conservative load profiles used.

Those figures are all quite similar, particularly if you compare an East to West.

Now we’re going to have a look at the other load profile and see how those figures change.

It’s pretty rare that you would get an opportunity to have all of your panels on the Northern roof. So, more often when this question comes up, it’s people deciding whether to put the panels on the East or the West, because they don’t have the remaining space on the North. In the first example, it doesn’t make much difference. However, let’s check out that other load profile. 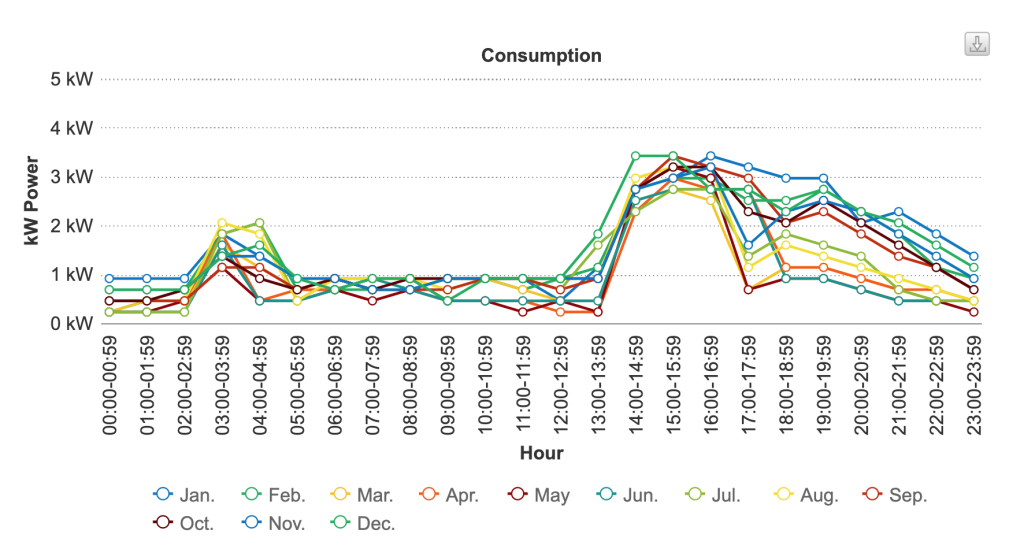 This is our load profile B. You can see how it differs, and how there’s much more energy being used in the early afternoon, because this household is leaving the house very early in the morning. The overall energy consumed is still 30 kilowatt hours per day, which is exactly the same as the first one. But, it’s structured differently in terms of when that energy is being used over a 24 hour period.

We are looking at the same solar system, same production figures, but the export will be different. Let’s start with the West again: 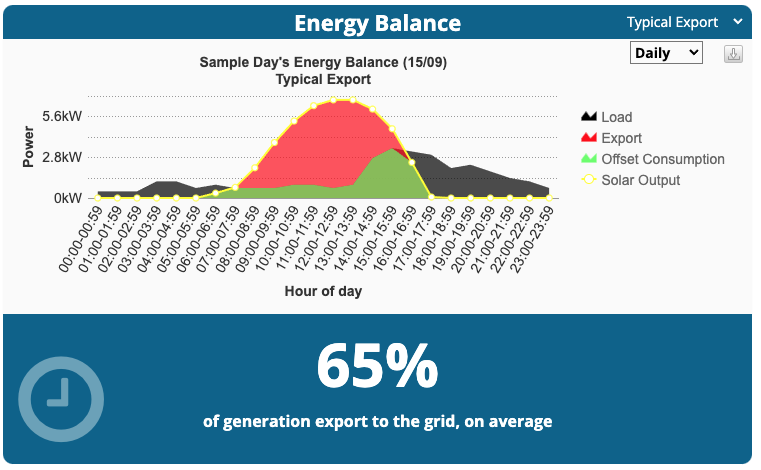 You can see that you’re exporting only 65% of the energy versus the first load profile where you are exporting 72%. It’s important to note here that exported energy is never worth as much as used energy. So, the lower that percentage is, the higher your savings are going to be.

Now, if we take a look at the same load profile on the Eastern roof, that solar system would export 72%. 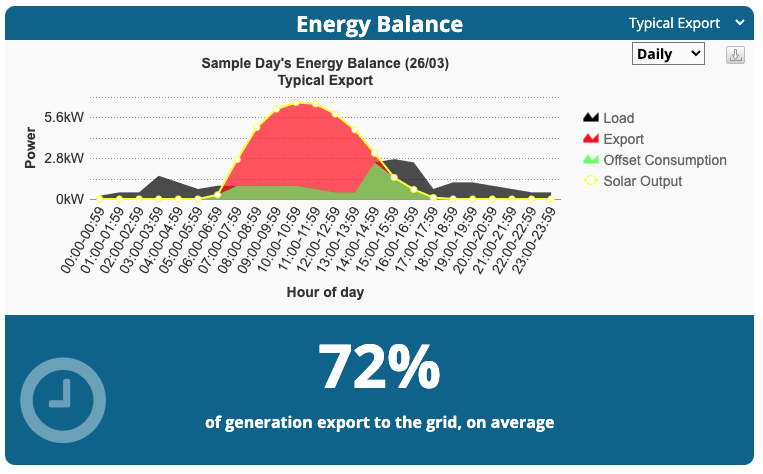 On the northern roof, it’s going to be quite similar to the first load profile at 71%. 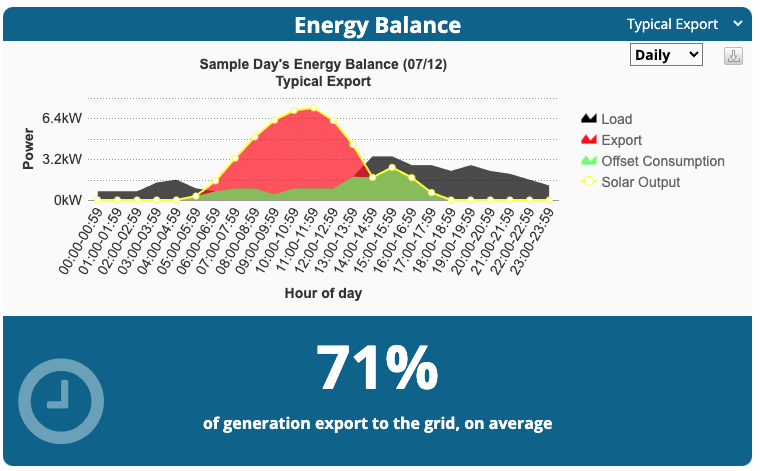 But what does that really mean In terms of savings?

Well, let’s take a look at the figures for the Western roof. On this occasion, you would save $1,581. 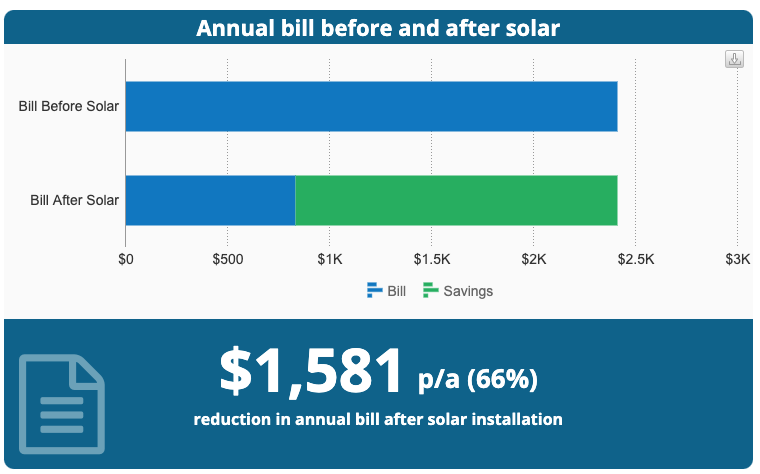 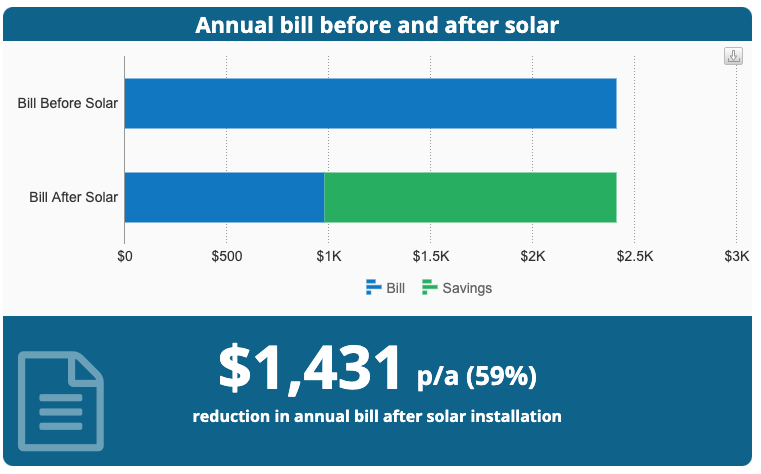 And on the Northern roof the savings would be higher again, at $1643. 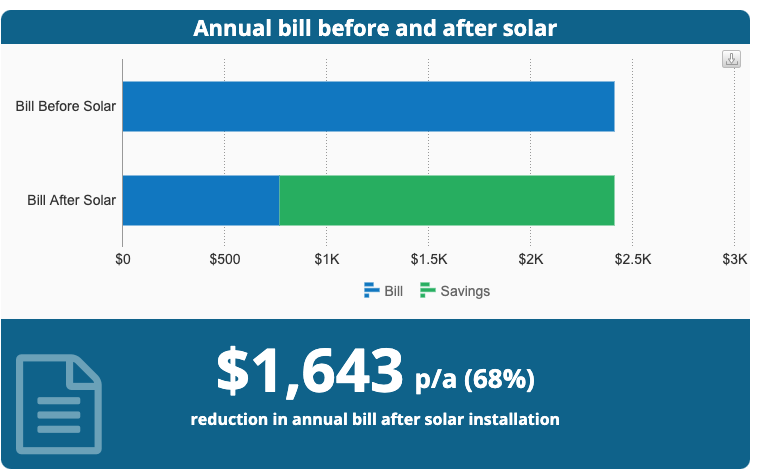 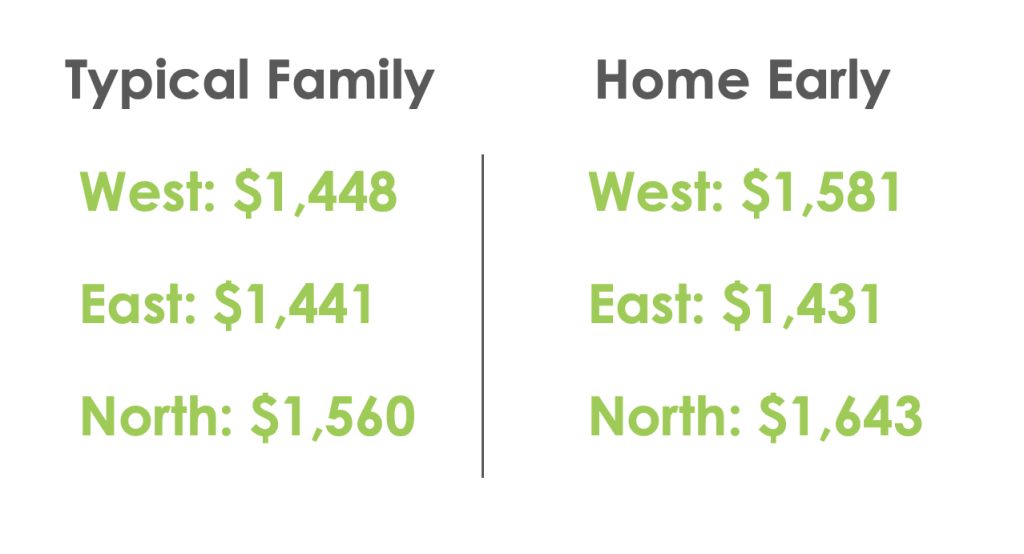 The point that’s really valuable here is you need to look at your load profile, before you decide where to put your panels.

The East is going to be better for some people. But clearly, for load profile B, the Western roof is going save a lot more money for this person. Whereas the typical family load profile didn’t make much difference. They could have put their panels on the West, or the East and it was only $7 difference across the whole year. But for the second load profile (for the person that’s coming home early), it makes quite a significant difference.

You really need to think about how you’re using energy, as well as how the energy is going to be produced. Because under these two examples, the solar production figures are exactly the same, the energy charges and amount that you’re being paid for your export is exactly the same, but there’s a fairly big difference in terms of how much money it’s actually going to save them.

Solar panels on the North is always going to produce more energy and it’s nearly always going to save you more money as well. But if you don’t have that option, and you’re looking at an Eastern and a Western array, you really need to look at your load profile, as well as all of those other factors.

We can obviously help more with this to talk through with you how you’re using energy and identifying the best orientation for your solar panels. So, if you’d like to know a little bit more, or you are trying to make that decision as to where your solar panels are going to go, please get in touch. One of our consultants here can go through a list of questions with you to build up your load profile. We can then use our software here to do a simulation for you just like this, and we can work out which is the best place for your solar panels before you actually make that decision and start getting something installed.

I hope this has been helpful. I hope it’s answered questions for you. Thanks for reading, and hopefully we’ll hear from you soon.

Pros and Cons of all major solar panel brands