Can you remember a time when a friend or family member told you about a remarkable opportunity and you’d missed out because you didn’t know about it… or didn’t know enough?

The Queensland Government released a solar & battery rebate and loan scheme in November last year.  In our eight years of operation we have never been busier trying to keep up with questions, quotes and bookings.  We’ve already installed over 150 solar & battery packages and have many more either booked in or awaiting approvals.

Our clients that are installed are absolutely blown away by the results and we’re sure you will be too.  Have a look at a few of our recent installations under this program.

We had the 6.38 kWh solar system with the LG Chem 6.5 kWh battery. This has dropped our power bill from $800 – $900 a quarter to $69 a month (without the $80 a month) that was with aircon running all day and most of the night during the heat waves. Great system! Highly recommend!

Awesome work from the boys this week, got our system installed and it’s awesome.

So what is all the fuss about?

Why is this so popular?

And… do you still have time to get in on the action?

There are two options available under this QLD Government scheme – one is very popular and the other was just ok:

The Solar and battery grant

The exciting part of this scheme is the first option.  If you don’t have an existing solar system, you have access to both the $3,000 battery rebate and the $10,000 loan.

It’s the loan that’s particularly exciting.  It’s a Government loan that is genuinely interest free.  But the real clincher is that it is repayable over ten years.  A $10,000 loan repayable at a rate of approx. $80 per month.  No establishment fees, no monthly account keeping fees, and no early termination fees.  That’s very – very affordable!

To add some perspective to that thought, what would $80 per month get you without a government loan?  Not a great deal.  Here is a comparison to help you understand the value that this loan is offering. 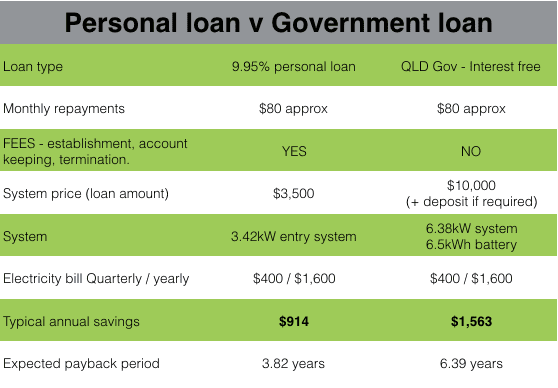 The annual solar savings are 58% more on the Government funded system.  For the same monthly loan amount, you can access a much better system with significantly better savings.

Even if you could afford to pay for a $10,000 solar system from your own pocket, with loan terms like these why would you?

If the government was putting interest free loans on anything, it would make it more attractive.  The battery is the centre of attention for the Government.  So they’ve made it a requirement to have a battery to access the loan… and the $3,000 rebate.  Therefore, the battery has two benefits for you, firstly it does contribute to better solar savings, secondly, it gives you access to a brilliant loan that ultimately saves you money every month.

The bottom line is, if you are a home owner and your electricity bill is more than $240, chances are this opportunity will put more in your pocket from day one.

The second option was less popular but still represented hundreds of approvals.  Most of the time, the numbers were not the most important consideration for these consumers.  Yes – numbers mattered, but there are several reasons we saw people overlook pure financials to add a battery to their existing system.

The biggest objection to adding a battery to an existing system was financial.  In the majority of cases, the battery was borderline to paying for itself by the time the ten year loan was paid out.  The savings were not quite covered by the $6,000 loan. That’s by today’s electricity costs.  In five years, who knows just how high electricity prices could rise.

In some very rare cases, adding a battery did make financial sense.  In some areas, Electricity costs are above 40c per kWh and feed-in rates are under 10c.  In this situation, the numbers stacked up – particularly when considering the higher increases for electricity in some regional areas.

Once in a while, a genuinely good deal comes along. However, most of the time offers that are presented are ‘the same old, same old’, a scam or a political money grab.  Some people have been burnt so many times that their sceptical nature is first to assess the offer.  Here are some of the comments we received:

Given the history of poor retail practices and political blunders in the past, these are very valid and understandable points of view.  After all, how many people have been ripped off by money hungry businesses cashing-in on the latest government rebate.

Fortunately for everyone, there were very good responses for these concerns.  Understanding why and how this scheme came to be is very assuring.

Currently in Australia, there are no safety or installation standards for solar battery installation. With the clear global growth of renewable energy and solar batteries, and with a considerable number of safety concerns a plan to build standards was needed.

Prior to the release of the tender to suppliers, we understand that the QLD Government spent over two years consulting with the solar industry leaders, solar testing facilities and electrical policy developers to build the standards that will be required for the safe installation of solar batteries in the future.

The QLD Government then released a 6 month tender to allow applicants to become solar and battery providers under this scheme.  To qualify for the tender, a solar business needed to be a Clean Energy Council – Approved Solar Retailer.  There were only around 120 solar businesses that met these standards at the time of the tender release.

This standard was put in place to ensure the highest standards of consumer protection and ethical business practice were followed during rollout of this scheme.  Please read more about the CEC retailers code of conduct here.

Part of the tender response was to provide tendered pricing for the solutions that were being provided.  This process protects consumers against ‘price creep’ that could rob them of the benefit of the $3,000 rebate.

The scheme was originally only available to the first 1,500 applicants, but has been raised by small increments since.  Limited numbers are to allow the QLD Government to conduct heavy auditing of the installed systems.  These audits are currently underway and being conducted by some of the best electrical auditors in Australia.  The audits will serve to ensure these initial applicants have a safe and professionally installed system in place.  They will also help raise issues and build a Statewide standard of installation and safety that could also contribute to a national standard.

GI Energy believes this is an outstanding approach to building safe and reliable future standards.  Without standards like this, the pink batts disaster could look like spilt milk in comparison to the potential problems with electrical fires.

Those that have already applied (and installed) their solar and battery solution will be benefitting from much higher audit levels during this scheme period.  Having an independent, qualified second set of eyes looking at your newly installed solar and battery system is great peace of mind.  Even if your system isn’t audited, the random nature of the audits will mean all installers will be putting their best foot forward.

You still have [a little] time to apply

A firm cut-off date of 30th of June was set from the beginning of this trial.  2,900 packages have already been approved and approx. 600 remain.  If they go before June 30, the QLD Government will place people on a wait list just in case some applicants are not approved.

If you’d like to take advantage of the last of these packages and perhaps get some answers to other questions we have not answered here, fill in the form below and we’ll be in contact shortly.

Don’t wait until it’s over to find out if this could have been right for you. 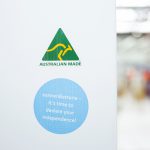 What Solar Batteries Are Made In Australia? 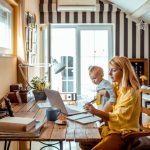