In Australia, there is a lot of sun to go around and right now is an ideal opportunity to tackle its force. Solar energy is just about as reliable as the sun itself. However, it’s reasonable to wonder:

Short answer, no. Solar panels don’t deliver energy around night time. The photovoltaic cells in solar panels need to be exposed to the rays of the sun to produce power. However, that is not the end of the story. Solar panels offer two alternative forms of energy production.

Solar panels produce energy the entire day drawing power from the sun. They likewise support feasible solar energy arrangements during the night. You can continue to benefit from the clean energy they produce after dusk through net metering and a solar battery. All in all, when you ask, how do solar panels work at night? These are the two ways that they can.

Solar energy is changing the manner in which we power our lives. Being connected to the grid with net metering and a solar battery both permit your solar energy system to give power when your solar panels are in the dark.

Net Metering Keeps You Powered at night through the Grid.

​In return the electric company gives you a repayment or credits your bill. At night, you can draw on those solar energy credits that you banked during the day.

Net metering is turned on when your panels aren’t delivering energy during the night. This bidirectional arrangement permits power to stream both ways all through your home. ​

Being connected to the grid guarantees power to your home regardless of the performance of your solar array. In other words, the grid becomes the place where you store your unused electricity.

Net metering is a great solution. Preferably, your net metering credits will take care of your expense of drawing energy from the grid (that’s how you can achieve a 0$ energy bill, or even be in credit).

It’s worth noting however that the advantages of Net metering are slowly decreasing every year. As more and more people install solar panels on their roofs, energy companies need to protect their investment. So the amount of money that energy companies will credit to you for the energy you feed into the grid is always lower than the cost at which they will sell this energy back to you at night. For example, it is pretty common to see a Feed-in Tariff (FiT) of 10 cents per kilowatt, and a cost per kilowatt of 20 cents! When going solar, we can help you find the best energy provider in your area that will give you the best deal for the solar energy you produce.

It’s your home, your energy. Use it when you need. A second way solar panels can continue to power your home at night is battery storage. Solar batteries work the night shift to take advantage of your panels’ daytime creation.

Solar panels fill your battery with energy from the sun.  With this solar energy stocked up, your battery gives you power through the night. Rather than sending your power to the grid, store it for yourself.

You’ll use the power first from the solar battery before drawing from the grid. Introducing a solar battery with your solar panels decreases your dependence on the grid making you virtually “off-grid” most of the time, except for a very cloudy day or days where you consume a lot of power.

Solar batteries give you control of your energy accounts and significant serenity, since you are less affected by the changes in energy costs and FiTs. Mortgage holders additionally value battery power during blackouts, allowing you to continue running essential appliances such as fridge and freezers, lights, fans, during a black out. 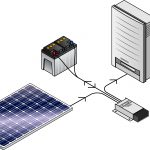 Today, most solar panel installation are connected with the grid and use net metering where it’s possible. Likewise, families are progressively introducing battery solutions. These two backhanded arrangements can work together at night to expand your energy security and limit electric bills.

You may program your battery to just draw power from the grid once your battery is drained. Or on the other hand, design net metering and solar battery stockpiling to work simultaneously.

For all their diligent effort during the day, solar panels take a rest around evening time. By using together solar panels with net metering or potentially a solar battery, you’ll have a solid, reasonable energy arrangement that works for you day in and day out.

A solar panel that works at night, soon a reality?

A newly created solar panel works even in the most obscure part of the night, as per a paper distributed by Jeremy Munday, an educator at the Department of Electrical and Computer Engineering at UC Davis. The scientists have created a new solar cell that can create up to 50 watts of energy for each square meter during the night under specific conditions. That is about a fourth of an ordinary solar panel’s yield during the day.

A traditional photovoltaic cell absorbs photons of light from the sun and creates an electrical flow. A thermoradiative cell produces electrical flow as it transmits infrared light (heat) close to the outrageous cold of profound space. The new panel works the manner in which a typical solar cell excepts backward. In contrast to a photovoltaic cell, a supposed thermoradiative cell creates power by emanating warmth to its surroundings and when pointed at the night sky it transmits infrared light since it is hotter than space.

“We were thinking, what if we took one of these devices and put it in a warm area and pointed it at the sky,” Munday explains. “A regular solar cell generates power by absorbing sunlight, which causes a voltage to appear across the device and for current to flow. In these new devices, light is instead emitted and the current and voltage go in the opposite direction, but you still generate power,” the scientist elucidates.

“You have to use different materials, but the physics is the same,” he adds.

Even better, the new panel nicknamed “the anti-solar cell” can work by day also if it’s safeguarded from direct sunlight or pointed away from the sun. As such, in contrast to regular solar panels, it can work nonstop, which would overcome a genuine limit with the current age of photovoltaic cells.

“Because this new type of solar cell could potentially operate around the clock, it is an intriguing option to balance the power grid over the day-night cycle,” the university says.

Here are some other links you may find helpful: